Just trying to stay on top of things!

Many friends of Grace’s former pastor, Louis ‘Rudy’ Beyer attended a special service, ‘A Celebration of All Ministry’ held at Immanuel Lutheran Church in Amherst, MA. Representatives of several faiths cooperated to create this unique service and a fitting tribute to Pastor Beyer upon his retirement. Pastor Beyer has a unique way of bringing people together and this service served as yet another example.

In 1990, Pastor Beyer was “instrumental” in the formation of Grace’s original guitar chorus which later became known as ‘The Bluebirds’. Three members of ‘The Bluebirds’ currently carry on as members of the ‘Back Row Band’ which supplied the preservice music for the event.

A reception in Rudy’s honor followed the service and several members of Grace were there to wish he and Judy well. Louise Flemming, ever ready with poems for all occasions, recited one she’d written just for Rudy. Others spoke in glowing terms of the man that many members of Grace Lutheran fondly refer to as Rudy. 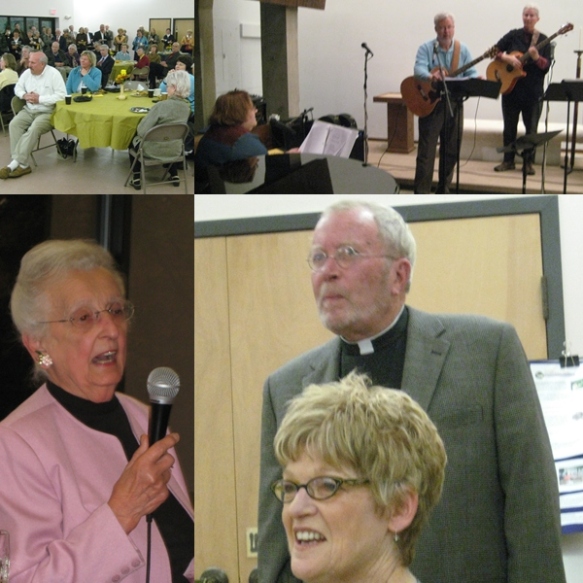 On Sunday May 18, the Sunday School of Grace Lutheran Church will meet
and assemble comfort kits for the Pioneed Valley chapter of the American
Red Cross.  These kits contain small personal items, toothbrush,
toothpaste, soap, etc, to be handed to fire victims when the Red Cross
arrives on the scene for disaster response.  The funding for this
project comes from a grant by Thrivent Financial for Lutherans and the
Sunday School plans to assemble 100 kits to replenish chapter supplies.

A special music rehearsal for Easter will be held on Saturday, March 22,
at 10:30 am.  All interested singers are invited to attend, even if
you’ve never sung in the choir before.  Singing is a wonderful way to
give back to God!